Please use the following short url to reference this page: https://www.dagstuhl.de/20372

The world is dynamically changing and non-stationary. This is reflected by the variety of methods that have been developed in statistics, machine learning, and data mining to detect these changes, and to adapt to them. Nevertheless, most of this research views the changing environment as a black box data generator, to which models are adapted (Figure 1, left). 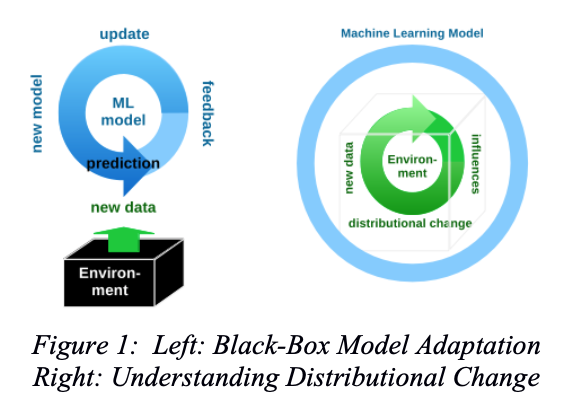 This Dagstuhl Seminar takes a change mining point of view, by focusing on change as a research subject of its own. This aims to make the distributional change process in the data generating environment transparent (Figure 1, right). It seeks to establish a better understanding of the causes, nature and consequences of distributional changes. Thereby, it aims to address the following research questions:

Thereby, this seminar will bridge communities where in separate lines of research some parts of these questions are already studied. These include data stream mining, where focus is on concept drift detection and adaptation, transfer learning and domain adaptation in machine learning and algorithmic learning theory, change point detection in statistics, adversarial generators in adversarial machine learning, and the evolving and adaptive systems community. Therefore, this seminar aims to bring together researchers and practitioners from these different areas, and to stimulate research towards a thorough understanding of distributional changes.

The world is dynamically changing and non-stationary. This is reflected by the variety of methods that have been developed to detect changes and adapt to them. These contributions originate from various communities, including statistics, machine learning, data mining, and the evolving and adaptive systems community. Nevertheless, most of this research views the changing environment as a black-box data generator, to which models are adapted (Fig. 1). 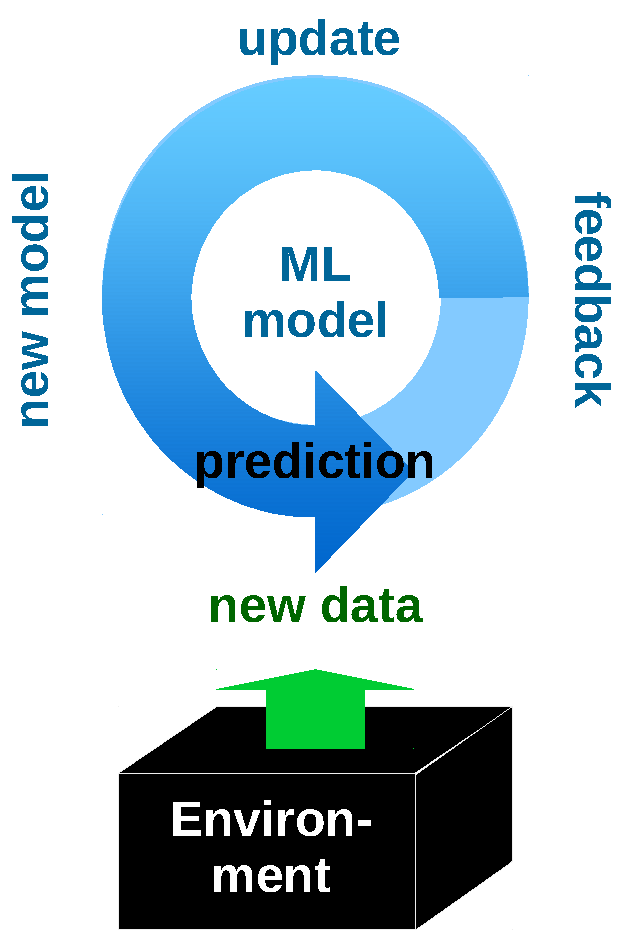 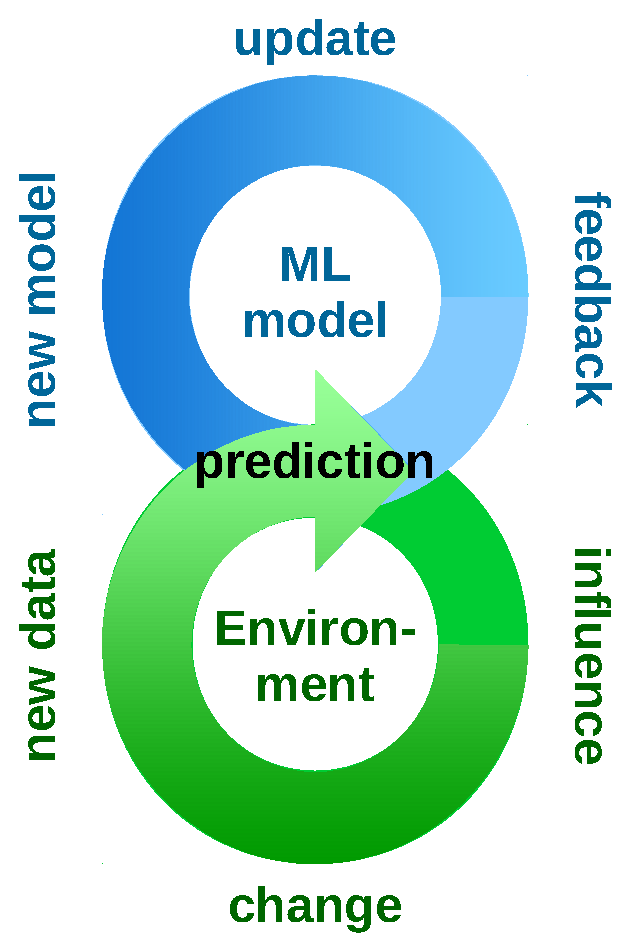 The aim of this seminar was to put the focus on the distributional change itself, i.e., to make the process itself more transparent and a subject of research in its own right (Fig. 2). In its endeavour to understand causes, nature and consequences of distributional change, the seminar brought together researchers from communities in which related questions have already been studied, albeit in separate lines of research. These include data stream mining, time series and sequence analysis, domain adaptation and transfer learning, subgroup discovery and emerging pattern mining.

Data stream mining studies data that arrives either one-by-one or in batches over time, and where the data generating process is often non-stationary. This requires computationally efficient approaches that are capable to detect and adapt to distributional changes. In this literature, the latter are commonly denoted as concept drift, population drift, or shift. Related to this seminar are in particular the problems of identifying change or irregularities in data streams, such as outlier detection [1], anomaly detection [2], change detection [3], change diagnosis [4], change mining [5], drift mining [6], and drift understanding [7].

Time series analysis studies data observed over a time course typically exhibiting some time dependencies. The correspondence of distributional change in this literature are distributional structural breaks or change points. Thus, of particular interest are the problems of statistical change point analysis, see e.g. the books by [8, 9, 10] or recent survey articles [12, 13]. A different line of research focuses on smallest detection delay for changes in sequentially observed data, see e.g. the recent books by [14, 15]. Of recent interest are also methods for the localization of multiple change points also known as data segmentation methodology, see e.g. the recent survey articles [16, 17, 18, 19, 20]. Of further interests is an early classification of time series [21].

Subgroup discovery studies the problem of finding subgroups that show an unusual distribution for a target variable. There is not necessarily a temporal relationship between subgroup. Of particular interest is exceptional model mining, which studies the problem of finding subgroups, where a model fitted to that subgroup is somehow exceptional [24]. Another related area is emerging pattern mining [25] for identifying emerging trends in time-stamped databases.

Topics Discussed in the Seminar

Due to the limited time, discussion has focused mostly on the first four research questions, with plans to address the remaining questions in a follow-up seminar.

As detailed in the description of the sessions below, and in particular for the plenary session, differences in the terminology, concepts and common assumptions used in the different communities were identified as an important challenge towards common understanding of distributional changes. Therefore, a potential follow-up collaboration will focus on a joint publication that provides a mapping of terms and concepts. In particular, it should work out the notion of change (and representation) in data streams and time series, as well as in domain adaptation with multiple temporally connected source domains.